The Minister of Works, Power and Housing, Mr. Babatunde Fashola, SAN, at the weekend, advocated the adoption of a collective national attitude that would make it possible to invest the over N5 trillion fund constituting the contributions of the nation’s working class into real sectors as a means of diversifying the nation’s economy and achieving inclusive growth.
Fashola, who spoke in Abuja while delivering a keynote address at the Nigerian Pension Industry Strategy Implementation Roadmap Retreat, said with the dwindling revenue from the country’s major source of income, the crude oil, there was dire need to diversify and change the face of the nation’s economy once and for all.
In his keynote address titled ,“Overcoming the Challenges and Managing the Risks and Constraints that Inhibit the Investment of Private Capital and Funds in Nigeria’s Infrastructure Landscape in Order to Make a Visible Economic Impact”, Fashola noted that with the right attitude to diversification utilizing the huge fund representing the contribution of Nigeria’s working class pension, it could be shown that the national economy is bigger than the challenges posed by the dwindling oil prices.

The Minister, who noted that the country failed to utilize the oil boom period to diversify the economy, declared, “Today’s reality is that we are in another cycle of burst. Oil prices have crashed from over $100 per barrel and is now hovering around $30 per barrel and there is a real chance that it will fall lower”, adding that one of the options available to still achieve diversification was to utilize its available assets or “savings such as the private money belonging to pensioners”.

“For over three decades we have mouthed the need to diversify our economy in order to open up more sectors for productive activities, income, economic growth and jobs. But we failed to follow through because of oil resources. Every time the cycle burst, we scampered, and promised to diversify but we soon drop the idea because not too far on the horizon is a boom in oil prices and we go back to an old life”, Fashola said.
According to the Minister, the periods 1970 and 1976, represented a period of the first oil boom when the Federal Government went on spending spree and increased salaries of workers while Nigerian workers asked for free everything until 1980s when the price of oil went down briefly and government mouthed diversification of the economy but dropped the idea again when oil price rose again, particularly between 2009 and 2014 when oil sold for over $100 per barrel for almost five years.
He advocated a rethink of the attitude of seeking everything free as, according to him, “nothing in life is free”. Fashola, who said the use of the Pension Fund for diversification would not be free, pointed out, “The pension funds, which are under the management of pension funds administrators, will not go into roads, rail, housing, hospitals or universities unless we change our attitude”.

“The new pension fund has shown what can happen if people resolve to contribute and pay their way…,”he said.

According to the Minister, “It was difficult to get private capital into critical sectors of our economy like infrastructure. Private capital and fund managers were not going to invest funds entrusted to them in infrastructure if we wanted to use them for free. As a people, we were willing to pay for these services outside our country but demanded that they be provided for free in our country”.
Citing Health Insurance as another option for diversification, the Minister said it would give Nigerians a choice and access to the best medical service when they need it, adding that it would also give them “a second highway away from public health service, which even with its best intentions cannot provide every service free”.
Still emphasizing on the need for a change in attitude in order to attract the necessary capital for inclusive economic growth, Fashola cited the Lekki Epe Expressway where, after the Lagos State Government had gone into a concession contract for its expansion, some politicians stirred up the people to protest the tolling of the road, adding that during the protests which threatened the contract, his biggest concern was Nigeria’s credit rating and the need to ensure that the project did not fail.
Expressing his delight that the nation’s business integrity was preserved against all odds, Fashola, who promised to do it again, declared, “What was at risk was bigger than the road and the Lagos State Government. It was a national reputation in the international business climate. For me, the lesson of this story is that we must not play politics with our economic survival. Investors want continuity of policies, even if Government changes. Our politics must therefore mature to the level where we must refrain from campaigns that threaten to cancel contracts. We will be poorer for it”.
The Minister also cited the examples of the Lagos State Security Trust Fund and Education in the State where Private Sector Funding ensured the equipping of the police against crime which resulted in the drastic reduction of crime in the State and the various initiatives introduced to attract private sector fund into Education, such as “Adopt a School Initiative” during his tenure as Governor.
Exploring the impact of pension funds across African subregion, Fashola noted that the prevailing poverty in the African Continent was largely as a result of “poverty of ideas or the abundance of risk elevating attitudes in the judicial and political spheres among others, adding, “These must change”.
He noted that the attitudes that once mired pension funds management in scandals and lack of transparency, had led to very stringent legislative interventions that limited the scope of activities that pension funds could participate in, but acknowledged the recent amendments being made to address this.
Quoting an online publication of “Institutional Investors”, which estimated Sub-Saharan Africa’s ten largest pension fund markets as having approximately $310 billion in assets recently, the Minister said that the funds were not serving the “REAL SECTOR” of roads, bridges, hospitals, rails, airports and fee paying universities among others.
“There is a palpably visible poverty in most of these countries, some of who gathered to seek funding support in South Africa recently at the instance of the Chinese Government who offered funding support (loans) of $60 billion for all of Africa, when 10 (ten) pension funds had $310 Billion, he said adding that many of these countries are scurrying after multilateral agencies looking either for aid or loans, “while sitting literally on a pot of money”.
The Minister also advocated the predominant use of arbitration if the private capital funded concessions and PPPs would succeed in the country, saying a situation where a case that has to do with public private contract or investment would last for years was anti investment.
He cited the case of the Lagos-Ibadan expressway where work had since stopped as a result of court cases involving the Federal Government and contractors, pointing out that the easiest and more acceptable way to resolve disputes arising from investment transactions was arbitration.

The Minister also advised judges deciding commercial disputes to act in a commercial and expeditious manner and refrain from granting injunctive orders that will stop the business, adding that a worrisome number of power projects are caught up in protracted court cases while the nation waits for electricity to drive the economy.
They should also focus on resolving the dispute without detriment to the business, and award damages instead to the injured party; decline jurisdiction whenever there is an arbitration clause and refuse the invitation which is frequently made, to set aside arbitral awards unless there is a PATENT case for doing so and must be encouraged to attend annual conferences of the International Bar Association whenever possible, because they offer very rich sessions in PPPs among others.

Thanking the organizers for the honour of the invitation, the Minister, who gave a brief insight into the chequered history of the fund, declared, “The current pension regime, whose managers are the organizers of this event happily have a better story to tell. It is a story of mutual contribution, where the employee and the employer share the responsibility of planning for the tomorrow.

“It is a story different from the past, where the funds are safe and have exceeded N5 Trillion.

It is a story of better management. It is the starting point for this discussion because there is a hard lesson here. If people put their money into what they believe in, it is likely to serve them better”, he said.
The well received keynote address was followed by an interactive session with the leadership of the insurance industry and the top management of the National Pension Commission led by its Director General, Mrs. Chinelo Anohu- Amazu, among others. 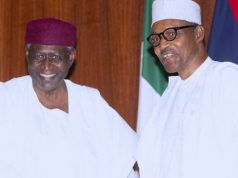 Loss Of Mother-In-Law: My Thoughts And Prayers Are With You, Tinubu Comforts Gbajabiamila