Nigeria’s former military dictator, General Ibrahim Badamosi Babangida’s health challenges are far from being over. In fact, it’s worsening daily. A source who saw him recently told YES INTERNATIONAL! Magazine that not only is age beginning to tell on him, walking around has also become a herculean task for the retired and gap-toothed Army General. “IBB has lost his swagger. As a matter of fact, he now moves around with so much difficulty. And even moves with the aid of a walking stick. Those who saw him during the last Council of States meeting in Abuja (on Tuesday, February 4, 2014, at the Presidential Villa) were shocked to see him almost limping with his walking stick. Not only that, the few times he stood up, sat down or even took a step were done was with so much difficulty. And it was obvious that day, judging from the look on his face, that he was in serious pains”.
Born on August 17, 1941, in Minna, Niger State, IBB was Nigeria’s 8th president and ruled between August 27, 1985 and August 27, 1993. Married to the late Maryam, before death disunited them, the father of four (Aisha, Mohammed, Aminu and Halimat) has for some time now been battling a recurring leg ailment. Added another source: “If what he’s going through should happen to a poor fellow, amputation would have since followed. But he’s been managing his because he’s very wealthy”.
Always remembered and criticized for his annulment of the June 12, 1993 presidential election, believed to have been won by his friend, Bashorun MKO Abiola, IBB masterminded the coup that ousted General Muhammadu Buhari; facilitated the coming of Chief Ernest Shonekan’s Interim Government and partially the foisting of late General Sanni Abacha on Nigeria. Educated in Nigeria (Armed Forces Command and Staff College, Jaji) and the United States of America (Naval Post Graduate School), he was nicknamed Maradona because of his then interminable transition programme.

Opinion (3/4/2020): Coronavirus And The President’s 10-Year Plan To Take 100 Million Nigerians Out Of Poverty – By Newton Jibunoh 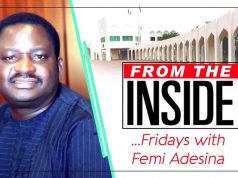