As the countdown to the maiden edition of Daylight Annual Leadership Awards (DALA) 2016 commences, the organisers have unveiled the super star hosts for the epoch event currently serenading Lagos and its environs.
The high-octane awards ceremony holds elaborately on Sunday, May 22, at the prestigious Civic Centre, Victoria Island, Lagos, amid glitz and grandeur.
Leading and revered entertainers, Okey Bakassi and Jennifer Eliogu, were unanimously chosen by the organisers as the comperes of the forthcoming evening of recognitions, celebrations, networking and high-net-worth gathering.
The famous duo, who are equally first class thespians in Nollywood, are expected to bring their combined wealth of experiences to bear on the historic awards ceremony as they direct proceedings with panache and poise.
According to a statement issued today by the Publisher/Editor-in-Chief of Daylight.ng, Mr. Azuh Amatus (NGE), who is also the Chairman and Founder of the awards scheme, Okey Bakassi and Jennifer Eliogu were painstakingly picked as hosts based on their pedigrees as accomplished comperes and entertainers.
“The duo has anchored several high profile events within and outside Nigeria. They are thorough professionals and we are pleased and proud to work with them as DALA 2016 anchor persons.
Bakassi is an actor, comedian and compere, while Eliogu is an actress, musician and compere. They are multi-talented entertainers with global fans base respectively,” stated Azuh.
While confirming his readiness to co-host DALA 2016, Bakassi, a graduate of Agricultural Engineering from the Rivers State University of Science and Technology, said he feels honoured to be chosen by the organisers to co-anchor the awards ceremony. “Thank you for the honour. I’m ready for DALA,” the father of three hinted.
Also speaking, elated Eliogu, who recently returned from South Africa, where she was invited to perform a special birthday song for iconic world figure, Arch Bishop Desmond Tutu, promised to make the awards ceremony sweet and memorable with her sonorous voice and enchanting smiles.
“I can’t wait to mount the stage and thrill guests. I also have a surprise for DALA awardees and guests on that day. I want to specially thank the organisers for having me on board as co-host of this great event,” pretty Eliogu added amid smiles. 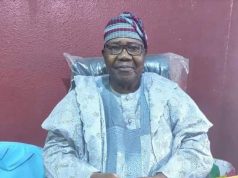