Lagos State Governor, Mr. Akinwunmi Ambode, at the weekend in far away United Kingdom, said the massive fall in oil prices in the international market is a blessing in disguise for Nigeria, just as he said the development is a tipping point not just for positive change but also to achieve inclusive growth and sustainable development.

Governor Ambode, who spoke on the theme: “Nigeria – Rising Above Crude Realities,” at the 3rd Annual London School of Economics (LSE) Africa Summit, said if honestly handled, the fall in oil prices had actually offered the country the opportunity to deliver real growth, as the high price of oil which the nation hitherto enjoyed created a distorted economic structure.

He said though the fall has sharply reduced Nigeria’s growth rate, export earnings, foreign direct investment, and government revenues, but that the nation stand a lot to benefit positively from the downturn.

According to the Governor: “The high price of oil created a distorted economic structure, where it was more valuable to capture value from the oil stream than create value. The returns to oil went to a few, with a tiny trickle down system to keep the social peace, but the reality is we squandered the oil wealth and arrived to 2015 with poor infrastructure, a poor education system, and poor level of social development.

The Governor said although Nigeria faces some tough time and tough choices with the new reality, he was hopeful that the low oil prices would serve as a tipping point for positive change, adding that the downturn was an avenue for both the leaders and citizens of Nigeria to address the sources of vulnerability in order to achieve inclusive growth and sustainable development.

Already, Governor Ambode said President Muhammadu Buhari has set the tone of enhance governance with focus on transparency and accountability, adding that such was needed at this critical point in time in the nation’s history.

He, however, expressed confidence that the country still has the financial band-width to immediately respond to the situation, adding that it was important to note that Nigeria was actually starting from a very good fiscal position.

Specifically, Governor Ambode said the country’s exceptionally low Debt-GDP ratio at 13% gives the latitude to be fiscally expansionary for productive expenditure that would stimulate the economy and create jobs.

Speaking on the potentials for growth in Africa, Governor Ambode who recalled the China experience, said as much as the continent needs to be transformed, Europe and the world desperately need the transformation and growth of Africa as well, because such would mean a more equal partner and more intense and deeper trade and commerce with the rest of the world.

He added: “A prosperous Africa would end the great press of migrants trying to enter Europe and for there to be real transformation, Nations and States must design their own path, with clear plans for growth and development, directed at achieving the Sustainable Development Goals (SDG’s). Chances of these being achieved are further enhanced when States/Cities such as Lagos play their part,” Governor Ambode observed.

Besides, Governor Ambode advocated a strong and functional tax collection regime for the African States, saying If properly implemented to Sub-Saharan African economies’ average of 18%, Nigeria for instance could potentially raise its tax revenue to $103.3 billion, the equivalent of Morocco’s GDP in 2014.

The Governor, while pointing out the investment opportunities in Lagos which is the 5th largest economy in Africa, said the state adopted a model that is based on strategic imperatives built on four pillars which included Infrastructure Development, Economic Development, Social Development and Sustainable Development, adding that the pillars were underlined by enhanced governance structures.

He said despite Lagos’ challenges, the state is now the commercial centre of Africa.

He said: “Despite not being an oil producing state, we are one of the few states that are self-sustaining with our Internally Generated Revenue growing by 84% to $1.4 billion in 2014 compared to 2010.

“Our strength lies in our demographics. The population is nearing 22 million of which a large proportion fall within the ages of 18-40- a ready labour force! We pride ourselves as the 5th largest economy in Africa with our GDP estimated at $131 billion in 2014 compared to Johannesburg’s GDP of $83 billion.

“This makes a strong case for Lagos not just as a promising market, but as an emerging global centre, with Africa’s lead in financial services, ICT, hospitality, and other high value-added sectors.

“We are committed to the vision of making Lagos state Africa’s Model Megalopolis and Global Economic and Financial Hub that is safe, secure, functional and productive. This is evident in the recent establishment of Lagos Global a one-stop shop for investors.”

The Governor, who equally recalled a recent PwC report which projected that in 2050, Nigeria would be the world’s 9th largest economy, ahead of UK, France, and Germany, said Nigeria must make the right reforms and take advantage of its immense human capital and natural resources.

According to him, since May 2015 when the All Progressives Congress (APC) assumed office, there has been a massive influx of foreign governments and private sector potential partners who recognize the potential of the country and respective States.

“We in Lagos have had more than a fair share of these future investors. We recognize that we have to provide the right climate to make the partnership work, and improving the ease of doing business.

“Another exciting journey for Africa has started and as I said at the outset, whether you are in Africa or in Europe, you have a strong incentive to make Africa succeed,” the Governor said. 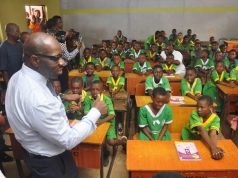 Obaseki Advocates Use Of Tech To Preserve, Promote Indigenous Languages

Buhari Shares The Beauty Of NYSC With Corpers In Daura

What a Messi Disaster!

Obaseki Advocates Use Of Tech To Preserve, Promote Indigenous Languages