The leadership of the Peoples Democratic Party (PDP) has been observing with dismay, the dangerous trend of politically motivated trials and tyrannical administration of President Muhammadu Buhari and the All Progressive Congress (APC) demanding that the ruling Party must stop the witch-hunt in the interest of peace and stability of our Nation.
The Party in a statement made available to newsmen on Wednesday, June 22, 2016 described the freezing of the personal account of Governor Ayodele Fayose of Ekiti State as unlawful, undemocratic, autocratic, oppressive, draconian and to say the least, the height of desperation by the Buhari administration to cover up for its failure to deliver on his campaign promises to Nigerians.
Prince Dayo Adeyeye, a member of the PDP National Caretaker Committee who spoke to the media on behalf of the Party, says the events in the Country in recent times have shown that President Buhari and the APC have no agenda for nation building, but on a revenge mission. “This government is all out to silence any voice of the opposition”, he decried. Nigerians will recall that Chief Olisa Metuh, the former National Publicity Secretary of our great Party is today standing trial for receiving campaign funds and since his arrest and prosecution by the anti-graft agency, Chief Metuh could not challenge the APC government on policy issues until he left office.
Nigerians will also recall that one of the known opposition voices, apart from some individuals and governors of our Party that has exposed the APC led administration for running the Country aground in the last one year is the former spokesman of the PDP Presidential Campaign Organization, Chief Femi Fani Kayode; and he is now standing trial for receiving campaign funds from the Director of Finance of the Campaign. It’s now the turn of the Governor of Ekiti State, Ayodele Fayose who has been consistent in condemning the woes the APC government brought upon Nigerians and for remaining critical of the APC and President Buhari’s administration.
The Party condemned the freezing of Governor Fayose’s personal account and asked the Economic and Financial Crime Commission (EFCC) to free the bank account immediately saying that the action violates Section 308 of 1999 Constitution as a sitting Governor cannot stand trial until after office.
“President Buhari and his Party, the All Progressive Congress (APC) have introduced a dangerous trend in our polity and if this is not checked or curtailed immediately, Nigeria may be heading to an imperial-rule where the leader of the nation is a supreme ruler dictating who survives at the expense of Nigerian Constitution”.
The Party called on all well-meaning Nigerians and all stakeholders in the Nigerian project who are still alive to rise up to the occasion and call the APC government to order before President Buhari destroys our hard earned democracy. 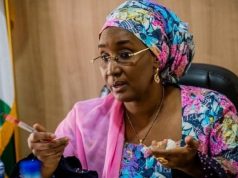