Music super star, Wizkid or Wizzy, has some interesting facts about him that YES INTERNATIONAL! Magazine would like to share with you – and below are just ten of them. Short, simple and snappy.

3. He grew up in Surulere, Lagos, and on James Robertson Street to be specific.

4. His father is a Muslim and his mother a Christian.

5. He’s a school drop out, having abandoned his studies at Leads University, Ibadan where he was initially pursuing a degree in Public Administration to concentrate on music.

6. His music career was ignited in the church.

7. He dated the girl he featured in the video of Holla At Your Boy, one of his hit tracks.

8. He’s got a baby mama (unconfirmed reports have it that there are two of them actually).

9. His debut album, Superstar contained 17 tracks and was bankrolled by Banky W.

10. He’s one of the richest musicians right now in the country, pocketing millions as artiste fee and cornering additional millions from endorsements here and there.

Flush Out Bandits From Around The Country, Buhari Directs Army, Police 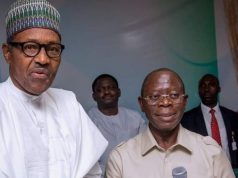 Flush Out Bandits From Around The Country, Buhari Directs Army, Police