Socio-Economic Rights and Accountability Project (SERAP) has faulted the claim by the Speaker of House of Representatives Mr Yakubu Dogara that “budget padding is not a crime under Nigerian law.”

Mr Dogara said this after a meeting with President Muhammadu Buhari at the presidential villa last week. According to him, “Budget padding is not an offence. What is padding? I studied law and I have been in the legislature and all this period I have never heard of the word padding being an offence under any law…Why should I be worried. As far as I am concerned, I am not worried over anything.”

But in a statement today by SERAP executive director Adetokunbo Mumuni the organization said that, “Budget padding in fact is corruption, as it is implicit in corruption offences such as abuse of office, attempt to embezzle, divert, and misappropriate public funds, conspiracy to act corruptly, and illicit enrichment, which are recognized under the UN Convention against Corruption to which Nigeria is a state party, and included in national legislation such as the Corrupt Practices and Other Related Offences Act, the Economic and Financial Crimes Commission Establishment Act and the Fiscal Responsibility Act.”

The statement reads in part: “The allegations against Mr Dogara and other principal officials of the House of Representatives also suggest a subversion of the budget process, which in itself is a crime but also a fundamental breach of constitutional provisions and an affront to internationally recognized human rights.”

“A prima-facie case of corruption is established when elected officials are allegedly influenced to act contrary to their obligations of office by the prospect of financial gain to themselves. Budget padding also amounts to corruption as the action is against the public interest. Any appearance of corruption in the budget process can result in a cynical public to losing interest in political participation altogether. And democracy can’t work unless Nigerians have faith in those who govern.”

“If Mr Dogara refuses to resign to allow for effective and transparent investigation and the allegations of budget padding are swept under the carpet, the ability of the House of Representatives to function as a watchdog and credible guardian of the public interest would be seriously compromised.”

“The allegations of budget padding and abuse of office by the Speaker and principal officials of the House of Representatives have continue to outrage the public, bringing the House’s integrity further into question.”

“Mr Dogara therefore has a duty to explain to Nigerians the role he played in the alleged budget padding in the House and abuse of office if the growing perception of corruption in the House is to be addressed.”

“Nigerians would like Mr Dogara to explain how the funds meant for legislative functions to service guest houses were spent. Nigerians would also like Mr Dogara to explain allegations that favours were sought from multinational companies including the allegation that a construction company was compelled to carry out some work at his Asokoro ‘plot’.”

“The truth about the alleged budget padding and abuse of office cannot be kept from the public, and treated as an internal matter or a case of see no evil, speak no evil.”

“The more the leadership of the House of Representatives recoils and resists Nigerians’ calls for investigation and accountability for those involved in the alleged budget padding and abuse of office, the more Nigerians will turn on the House of Representatives, and the calls for those involved to step down and for an independent and transparent investigation and prosecution will only get stronger.” 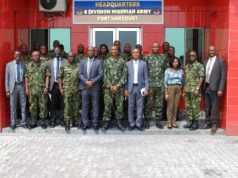 Olamide Shuts Down ICM As He Announces His New Brand Endorsement

None but me – Insecurity