In furtherance of the social responsibility initiative of the All Africa

Music Awards, AFRIMA in partnership with the Africa Union, the

other writing materials to participating schools at the recent

Street, Lagos on Wednesday, October 5 with the topic: ‘Reparation, Yes

or No”. This forms part of the programme of activities for FELABRATION,

the annual festival organised to celebrate the legacy of late music

AFRIMA, Mr Kingsley James, said it created another platform for the

activities in Lagos State, the 2016 Official Host City for AFRIMA

through its Educate-A-Child (Our Voice) initiative. “AFRIMA is committed

to reducing illiteracy in Africa via the

Educate-A-Child Campaign (our voice) initiative by driving support for

investment in education, formal and informal, by African leaders”,

stated James.
Speaking at the opening of the debate, founder of Felabration and

daughter of the late music legend, Ms. Yeni Kuti, stressed the need for

students to be adequately equipped with the knowledge of history

for the promotion and development of African’s rich culture and

heritage.
She said, “The topic was chosen to test the knowledge of the students on

history. We needed to challenge their knowledge of Africa’s history and

for students to learn new things about their heritage. We want to

keep Fela’s love of culture and learning alive among young people. This

understanding. It is not a competition but a test of knowledge and to

encourage all and no school would be exempted from receiving gifts.”
10 Senior Secondary Schools in Lagos State namely: Aunty Ayo Girls

and Dowen College, were represented by their students who turned out in

numbers.
After a brilliantly engaging session by the student debaters judged by

Alawode-James (TVC broadcaster), the first prize was clinched by Dowen

position, Aunty Ayo Girls Comprehensive Senior Secondary.
After receiving their winner’s prizes and other gifts handed out by Mr.

November 4-6, 2016 which includes the Africa Music Business Summit on

Friday, November 4 and the AFRIMA Music Village, an open concert-style

music stars, also on Friday, November 4.
In partnership with the AUC and the Official Host City, Lagos State,

thousands of guests expected in Lagos for the various events. 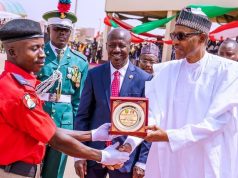 My Husband Hasn’t Made Love To Me In 5 Years, Sex-Starved Wife Tells Court