The Ogun State Governor, Senator Ibikunle. Amosun has said his administration would partner the private sector in its determination to reposition education in the state.

Speaking at the 8th Convocation of Cresent University, Abeokuta, yesterday, the governor emphasised that his government places high premium on education and promised not to relent in his efforts to ensure qualitative, accessible and affordable education.

The governor, who announced automatic employment for the first class graduating students into the state public service, advised the graduates to strive to become self reliant and not depend on white collar jobs.

He also charged them to be good ambassadors of the nation, the institution and their families as well as apply all their academic knowledge towards the development of the nation.

In their separate remarks, awardees, former Head of State, General Abdulsalami Abubakar and the Alafin of Oyo, Oba Lamidi Adeyemi, who were both honoured with the award of Doctor of Science in Public Administration, appreciated the management of the institution for the honour bestowed on them.

The both advised political leaders to always fulfil their election promises while also urging Nigerians to be considerate in their expectations.

In his address, Proprietor of the University, Prince Bola Abdul Jabbar Ajibola noted that the institution is determined to ensure that the graduates continue to be noted for exemplary character, excellent academics and sound morals.

Vice-Chancellor of the university, Professor Ibraheem Gbajabiamila, who noted that the graduates were found worthy not only in learning but also character, disclosed that the university has equipped them to succeed, charging them to look up to the future with confidence. 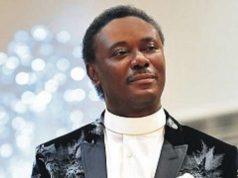 ‘We will relay Abacha loot letter to Trump’, says US embassy