Ogun State Governor, Senator Ibikunle Amosun, has stated that his administration has articulated a new and holistic environmental policy geared towards efficient and effective management of the environment.

Amosun revealed this at the Climate Change Knowledge Immersion workshop, organised by the Federal Ministry of Environment and the World Bank Group in Abeokuta yesterday.

The workshop was meant to accelerate climate-resilience and low-carbon development in Nigeria.

While explaining that the state government would vigorously pursue the mission to rebuild Ogun State, the governor said, “government is committed to make it a united, secure, stable, and economically prosperous society founded on strong democratic principles.”

He added that existing industries in the state have been encouraged to adopt environmental friendly technologies in order to ensure safe environment.

“Our government will always support genuine efforts directed towards the development of the state’s economy and will not allow what will have negative impact on the environment,” he said.

Highlighting the various efforts of the state government in making the environment safe, the governor said an emergency operations task force has been set up to evacuate all refuse dumps.

He added that the state government has also procured a swamp bogie to dredge the river channels.

In addition to these, Amosun said the state government is also working on planting about two million trees in the Ogun West Senatorial District adding that individuals have also been encouraged to plant trees.

Earlier in his address, the Minister of State for Environment, Mallam Ibrahim Usman Jibril charged Nigerians to join hands in reducing greenhouse emission.

Jibril, who noted that the workshop will help in passing across the needed information on how to sustain the environment, revealed thar the 2017 edition of the National Council on Environment will be held in Abeokuta. 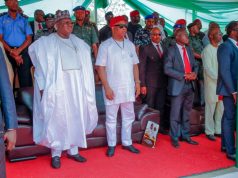 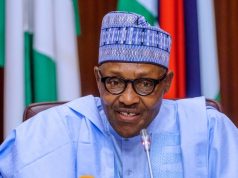 Today, We Save Millions Of Dollars That Could Have Gone Into Food Importation, Says Buhari

The Task Of Rebuilding Imo State Is Very Daunting And Enormous, Says Ihedioha

Ambode: All Sponsored Attacks Will Continue To Fall

Today, We Save Millions Of Dollars That Could Have Gone Into...