The fact that President Muhammad Buhari is back to Nigeria after a 51 day medical vacation is no longer news. The president arrived Nigeria early Friday March 10, 2017 via the Kaduna airport from where he went, by chopper, to Abuja.

He held a meeting with Vice president Yemi Osinbajo and others before retiring to his official quarters after quipping jocularly that the Vice President should keep acting while he continues to rest.

News of the president’s imminent return circulated late on Thursday March 8, 2016 a few hours after news and pictures of Buhari playing host to the ArchBishop of Canterbury, Justin Welby at the Ahuja House in London surfaced online. Many nay sayers had doubted the news of his return on account of the fact that many platforms had reported that he was terminally ill and unable to speak or walk.

All these despite assurances from the presidency that the presidenct was well and merely observing a period of convalescence.

The stories did not abate that he was flown out in an air ambulance despite visits by APC stalwart Bola Tinubu and Senate President Bukola Saraki as well as a telephone conversation with Donald Trump and presidential spokesman, Femi Adesina. The view persisted that Buhari was too sick to return, to speak or even work.
Why did news of Buhari’s ill health generate so much emotion and conversation across the polity? One, many wondered why he had to seek medical attention abroad when so much had been spent on the Aso Rock clinic. Secondly, the extension. President Buhari left Nigeria on January 19 for a holiday in the UK. Before his departure, the president despatched a letter to the Senate informing them of his trip and expected return on February 6. He also handed over to Vice President Yemi Osinbanjo.
However, a day before his arrival, Buhari informed the senate that he was extending his stay in the UK sparking further speculations about his state of health.
But a few day’s before the president’s return on March 10, sabinews.com spoke to a presidency source who confirmed to us the real state of the president’s health and what led to his long absence.
Sabinews was told categorically that the president’s illness is far from terminal. We also learnt that the president’s long stay abroad might have inadvertently been caused by himself no thanks to his legendary intransigence and frugality. The truth, it now seems, is that Buhari’s “Ijebu” put him in hospital.
However, to better understand why a president’s health or lack thereof is cannon fodder for speculations, let us share a few examples from other countries.

The same story appeared in ABC, Salon and many other sites. The DW story said the German leader had been forced to cancel her African trip because her 79-year-old host took ill.

“Chancellor Merkel’s visit to Algeria has been called off because President Bouteflika is too sick to meet. The two-day trip was part of an effort to stem migration from North Africa in an election year in Germany.”

Last Christmas, a few weeks after a BBC gaffe claimed the British monarch was ill, the longest serving monarch in the modern world, missed her traditional christmas church service thus sparking furious rumours about her health. Buckingham palace put it down to a cold in a country where “the cold” can cover up a multitude of sins.

A story in the New York Times captured it succinctly: “Queen Elizabeth II, who has been battling a cold for more than a week, missed a New Year’s Day church service at her country estate in Sandringham, Buckingham Palace said on Sunday. A week earlier, the queen, who is 90, missed a Christmas Day church service, for the first time since 1988, because of the illness.”

Reporting on the same story under the caption, “Just how ill is Queen Elizabeth”, the Daily Beast said “the death of the monarch has become a British obsession” presented a more dramatic perspective. “With just half an hour’s notice, they failed to show up for their annual train ride on the 10:44 to King’s Lynn, a town close to Sandringham. It took over three hours for the palace to get an official statement out, which read: “The Queen and The Duke of Edinburgh have heavy colds, and so have decided not to travel to Sandringham today…”Photographers waiting to snap the queen and her husband at the railway station…were abruptly told, “It’s not happening now,” just 30 minutes before the service to King’s Lynn was due to depart.”

In January 2002, president George Bush fainted while watching football on tv in the white house. He lost consciousness after choking on a pretzel (biscuit). The Los Angeles Times reported the story. “President Bush briefly lost consciousness Sunday after he choked on a pretzel while watching a football game on television in his living quarters, the White House said. After fainting, the president tumbled to the floor from a couch, bruising his lower lip and suffering an abrasion the size of a half dollar on his left cheek, White House physician Dr. Richard Tubb said. Tubb, an Air Force colonel, said Bush recovered quickly. “I do not find any reason that this would happen again.””
Last year on September 11, in the heat of the American presidential campaign and while on a visit to the 9/11 memorial Hillary Clinton, the Democratic frontrunner fainted. The news was widely reported with conservative Fox news calling the incident a “health episode.” According to them “Hillary Clinton appeared to stagger and faint in footage showing her early exit from a 9/11 commemoration ceremony on Sunday, though Clinton’s doctor said the episode was a result of heat and dehydration — and revealed she had been diagnosed with pneumonia two days prior. Democratic presidential candidate Hillary Clinton attends the 2016 ceremony at the Sept. 11 memorial in New York. (AP) The Democratic presidential nominee fell on her way into her van and had to be helped by her security, according to witnesses and video of her leaving. She was “clearly having some type of medical episode,” a law enforcement source told Fox News.”
What is the point of all these examples? It is to show that even leaders from some of the most powerful nations and kingdoms on earth with the best medical care at their beck and call also suffer health challenges.
This is one inalienable truth that Nigerian leaders seem not to have learnt. As leader of a country, your health of lack of it is the concern of your compatriots. That sad fact was communicated eloquently by President Buhari’s long absence from the country. This is reason why that long absence which lasted almost two full months led to all sorts of wild speculations.
Buhari’s journey to the hospital began actually December 13, 2016, on trip to The Gambia. The trip, alongside three other African heads of state was to convince Yahya Jammeh to step down. The visit was widely covered and The Telegraph of London had this to say.
“Gambia’s embattled dictator despatched riot police to occupy the country’s electoral commission on Tuesday as he defied mounting international pressure to step down…The move came as three West African presidents led a heavyweight delegation to Gambia to persuade Mr Jammeh to stick to his original promise to go quietly. Muhammadu Buhari of Nigeria, Ellen Johnson Sirleaf of Nigeria, and Ernest Bai Koroma of Sierra Leone are understood to have warned Mr Jammeh that if he does not step down immediately, he will face tough measures including sanctions. To ram home their message, they were joined by Ghana’s outgoing President John Mahama, who also lost elections this month but has agreed to go quietly.”
What the Telegraph and many other papers did not say and couldn’t have known was how gruelling Buhari’s journey was and how it took a huge toll on his 75 years old body.
The normally 5 hrs 50 mins flight over 2, 666 kilometers (Abuja to Banjul) ended up lasting over 10 hours because Buhari, famed for his frugality decided to offer rides to the presidents , Ellen Johnson Sirleaf of Liberia, and Ernest Bai Koroma of Sierra Leone.
The two presidents who do not own private jets had asked for a private jet to convey them to Banjul but Buhari looking at the cost of making the Gambian trip with two jets decided to pick both of them up then drop them after the meeting and in the process elongated the journey.
So, Buhari eventually flew 10 hours to Gambia, had a 6 hour meeting, then flew 10 hours back to Abuja via Liberia and Sierra Leone.
“By the time we left the plane, everyone could see that the man was worn out,” the presidential source told sabinews. “The marathon journey and meeting had taken a toll. I believe that was when his health problems began.”
Continuing, the source added that “I am not holding brief for him but he is an old man. I saw him during the campaign, he held his own and I have seen him work. You know soldiers have a physical regime that is exemplary but that trip took a toll on him and you can’t blame him. Remember how young Obama looked when he came into the White House and see how grey and tired he look eight years after. Then compare Obama who came in in his forties to a man who took office in his seventies.”
With Buhari back in the country and having walked out of the plane on his own two legs, the speculations are expected to die down even though his quip that Osinbajo should continue acting was aklmost be misinterpreted.
There is a lesson, however, in all this. The lesson however is for the president to learn to communicate more effectively. Yes, he had no reason to prove that he was well and alive but a 5 minute visit by three or four Nigerian journalists would have gone a long way in diffusing tension and dousing speculations because believe it or not Nigerians will believe journalists more than they would believe politicians.
But then would Buhari still be Buhari if he allowed us stampede him into proving that he was indeed alive and well? I guess the answer is no.
Welcome back, Baba Ijebu.

Pictures: Fashola At The Commissioning Of Woodhill Estate Under The Federal Mortgage Bank Of Nigeria (FMBN) Cooperative Housing Development Loan In Abuja 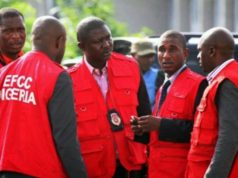 IMC Players To Discuss ‘Advertising And Power Of Nigerian Story’ At...

Pictures: Fashola At The Commissioning Of Woodhill Estate Under The...