On behalf of the Federal Government and his family, President Muhammadu Buhari heartily felicitates with Ogun State-born businessman and eminent philanthropist, Sir (Dr) Kesington Adebukunola Adebutu (CON) as he clocks 82, on October 24.

The President lauds Sir Adebutu’s contributions to the growth of the economy through his businesses, and the provision of jobs to thousands of Nigerians especially the youth.

He also commends the business acumen, hard work and sheer determination which enabled the celebrant to rise from humble beginnings to currently sit atop a business empire.

President Buhari affirms that Sir Adebutu’s philanthropic programmes under the auspices of the Kesington Adebukunola Adebutu Foundation have made life more meaningful for less privileged Nigerians.

Describing as “worthy of emulation” the donations made particularly to educational and religious organisations by the kind-hearted octogenarian, popularly called “Baba Ijebu”, the President notes that such contributions have endeared him to Nigerians from all parts of the country. 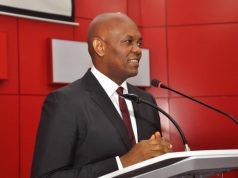