Lagos State Governor, Mr Akinwunmi Ambode on Tuesday took a swipe at the sixteen years presidency of the Peoples Democratic Party (PDP) between 1999 and 2015, saying the State benefited nothing from the party’s reign.

Speaking at the National Consultative Forum of the National Committee of Buhari Support Groups, a coordinating body of all the groups campaigning for the re-election of President Muhammadu Buhari and Vice President Yemi Osinbajo in 2019, held at Nicon Luxury in Abuja, Governor Ambode said the country would not go back to Egypt by bringing PDP back to power having crossed the Red Sea.

He said just within three and half years from 2015 till date, the All Progressives Congress (APC) had been able to lay a solid foundation for Nigeria’s economic growth and prosperity, adding that the Buhari/Osinbajo ticket remains the best option to take the country to the next level from 2019.

“Sixteen years of PDP, I can say it clearly that Lagos State never enjoyed anything from them. Three and half years of APC, I can clearly attest here that whatever it is that we have achieved in Lagos in the last three and half years, the present Federal Government has largely contributed to the things that we have achieved be it in terms of right of way, be it in terms of approval for waivers for import duties and other things that have actually made Lagos to be on the progressive trajectory that it had been in the last twenty years.

“So, for me it is very easy and it is just common sense that we have to uphold the Buhari/Osinbajo ticket to allow that economic progress and the growth in the GDP that we want for Nigeria rather than allowing it to get dismantled and then make us to go back to Egypt after crossing the Red Sea and we are not going back to Egypt,” Governor Ambode said.

He said since assuming office in 2015, the Buhari administration had worked tirelessly to bring about fundamental paradigm shift and retracing the steps of the country for sustained progressive chart, adding that the onus is now on the entire country to give the APC a chance to consolidate on the massive development already embarked upon.

“I just want Nigerians to understand and also to encourage all our members here that what we have started as a support group coordinating everything that is happening is not necessarily for you but it is a selfless service to put Nigeria on that trajectory that grows prosperity and also conveniently in another four years, we would make all Nigerians proud and I am very proud to be part of this.

“We have made up our mind that we are going to work tirelessly; we would do everything that is possible in terms of supporting and campaigning to let Nigerians understand that there are two parallel lines between what we stand to offer which is growth and prosperity for this country and what PDP is trying to come and re-engineer to take us back to the debris of the past that we don’t want to ever go back to.

“So, I just want to congratulate Mr President, Muhammadu Buhari and also the Vice President, Professor Yemi Osinbajo and assure them that when they look at their back, they have true Nigerians who believe that yes, we want to build a skyscraper but we need solid foundation to be able to enjoy that skyscraper and then the next level we are thinking on is to be able to put the proper aesthetics and lay the proper foundation to allow Nigeria to make progress and that is what the Buhari/Osinbajo ticket speaks about,” the Governor said.

Besides, Governor Ambode said it was also gratifying that all APC Governors were united in ensuring the victory of APC in the presidential election next year.

“All APC Governors, I can speak on their behalf, are resolved that the Buhari/Osinbajo ticket is what Nigeria needs and that is what we are going to pursue and I am happy that a handful of our gubernatorial candidates are here to align with us to make sure that what we would deliver is what Nigerians want and what Nigerians want is the APC President,” Governor Ambode said. 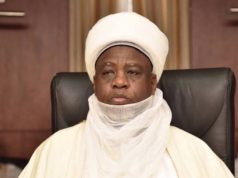 ANAMBRA WILL PRODUCE ANOTHER QUEEN ON FRIDAY, UCHE NWORAH