The ‘Derbi Barceloni’ between Barcelona and Espanyol is the key match in Round 29 of the 2018/19 La Liga season.

Barcelona come into the match on Saturday afternoon fresh from a 4-1 win away to Real Betis in which Lionel Messi scored a hat-trick to further extend his lead at the top of the scoring charts – the Argentine master has netted 29 goals this season, 11 more than his nearest chaser (which happens to be teammate Luis Suarez).

The result took Barca’s lead at the top of the log to a full 10 points and, with a UEFA Champions League quarterfinal against Manchester United looming early next month, manager Ernesto Valverde could perhaps look at resting key men in this clash.

However, the fact that it is a derby means nothing less than a victory will be accepted by the Camp Nou faithful, who will be hoping to inflict a second straight defeat on Espanyol after their 1-0 reverse at home to Sevilla before the international break.

Another key match sees Deportivo Alaves host Atletico Madrid at Estadio de Mendizorozza. The former are in a fight to claim the last Champions League berth, while the latter have fallen back into a scrap with cross-city rivals Real Madrid for second place.

Alaves are hoping to beat Getafe (who host Leganes on Friday night) and Sevilla (who are at home to Valencia on Sunday) to fourth place and aiming to extend a six-match unbeaten streak in La Liga. However, Atletico are likely to have shaken off the cobwebs from their back-to-back losses at the hands of Juventus in the Champions League and Athletic Bilbao for their trip to the Basque country.

Zinedine Zidane secured a 2-0 win over Celta de Vigo in his first match in charge of Real Madrid since returning to the club earlier this month, and he will hope that the extra time to settle in and train players during the international break pays dividends when they host Huesca at Estadio Santiago Bernabeu on Sunday night.

Los Blancos will end the season with no trophies to add to their legacy, but ‘Zizou’ can at least target a second-place finish in La Liga. 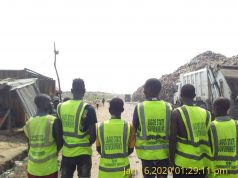 LAWMA To Create Hall Of Shame For Environmental Offenders

LAWMA To Create Hall Of Shame For Environmental Offenders