Many were on Sunday feared killed and others injured in fresh violence in parts of Jos, Plateau State.

Houses were also reportedly burnt during the violence which spread to communities, including Dutse-Uku and Rikkos.

Confirming the violence in a statement on Sunday, the Police Public Relations Officer in Plateau State, Mr Mathias Tyopev, said security men had been drafted to quell the fight.

He said, “We have received reports of tension around Dutse Uku, Rikkos, Cele Bridge and we have mobilised our personnel to the area.

“As we speak, the area commander, Jos metropolis, is there on ground.”

A resident of the area, who identified himself as Mr Paul Musa, said there had been tension in the area since last week when a boy from Angwan Miango was found dead at a boundary between the community and neighbouring Rikkos, a community of Hausa residents.

He claimed that on Sunday morning, another boy from the same Angwan Miango was killed at a stream that runs across Angwan Miango and Rikkos communities, adding that indigenes of Angwan Miango went on a reprisal against Rikkos, resulting in killings.

Some churches, it was gathered, hurriedly ended their services to guard against attacks.

Meanwhile, one person has, again, been declared missing following another attack on Plateau State Polytechnic staff quarters by gunmen.

It was gathered on Sunday that the lady identified as Murbi was abducted when gunmen raided the staff quarters located at Heipan, in the Barkin Ladi Council Area around 8pm on Saturday.

A resident of the community, Mr Solomon Dalyop, confirmed the attack to our correspondent in Jos on Sunday.

Also, Assistant Registrar of the Polytechnic, Mr Ezekiel Rangs, whose sister was recently released after she was abducted by gunmen at the staff quarters, confirmed the attack to our correspondent in Jos on Sunday

He said, “I’m provoked this morning. You people need to come and see what we are suffering in the hands of gunmen at the staff quarters. The situation is unbearable.”

The state Police Command has yet to make any public statement on the latest attack, which is the third time this year. 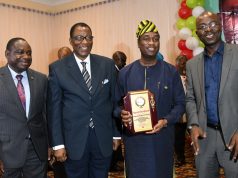 Lagos City Marathon: Customers In For A Good Time On DStv And GOtv