At a brief but impressive ceremony held at Lagos House, Alausa Ikeja, the wife of the Deputy Governor, Mrs Oluremi Hamzat was also inaugurated as the Grand Matron of the Association in the State.

The State Commissioner of the Association, Mrs Iyabode Okuyeri who led the team, said it was a rare privilege to have people in the caliber of the First Lady and the wife of the Deputy Governor to lead the Association as Patron and Grand Matron at this particular point in time.

Okuyeri said in view of the impressive track record of service of the First Lady and Mrs Hamzat, she was confident that their leadership would create a great impact in the association in particular, and Lagos State in general.

Responding, the First Lady, who spoke on behalf of the awardees, assured that they would make good use of the opportunity to mentor and encourage young girls to become responsible adult citizens.

“You have said we should shine our lights wherever we go and that is what we are going to do. We pray that God will continue to direct us and lead us aright, and be an encourager and mentor to many girls out there. It is nice to say that on our honour and with trust in God, we will deliver,” she said. 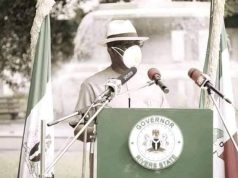