The Anambra State Government has established a scholarship scheme to train 100 pilots and flight engineers as well as other aviation professionals in the next few years so as to increase the state’s presence in the aviation industry.

The scheme was approved at the meeting of the state Executive Council at Government House today following a presentation by the leader of a nongovernment organization (NGO), Girls Can Fly Initiative, Mrs Obiagelu Ikejiaku-Adelana, who is the first female pilot from Anambra State.

Consequently, Governor Willie Obiano has set up a committee to ensure the swift and successful implementation of the scheme has been set up, with Air Vice Marshall Ben Chiobi, a retired Nigerian Air Force Pilot who is also the Special Adviser to the Anambra State Government on Creative Security, as chairman. Other members of the committee are the Commissioner for Creative Economy and Youth Development, Mr Afam Mbanefo; the Commissioner for Tertiary Education, Science and Technology, Professor Theresa Obiekezie; and the Commissioner for Basic Education, Professor Kate Omenugha.

The government has set aside N750m to train the first batch of 50 persons to benefit from the scholarship at the Nigerian College of Aviation Technology, Zaria, Kaduna State, for two years to obtain the basic flying licence.

Thirty of the 50 beneficiaries will be female, and at least two persons will come from each of the 21 local government areas in the state to ensure “spread, equity and fairness”, according to Governor Obiano who expressed dissatisfaction at the “irony that though Air Peace, the biggest airline in the country, belongs to Allen Onyema, a worthy Anambra indigene, there are only three or four female pilots from the state”. The scholarship scheme is open to persons who are up to 16 years and have either tertiary or secondary school education.

“To catch them young, my committee will in the next few days start a tour of some 10 schools in the state to sensitise students on the opportunities in the aviation industry”, AVM Chiobi told journalists shortly after his committee was set up.

Mrs Ikejiaku-Adelana described the scholarship award to boost the state’s participation in aviation as exemplary, advising other state governments to take a cue from Anambra. 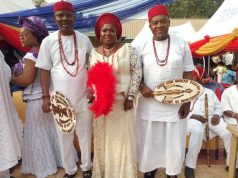 Buhari Prays For Tony Momoh At 80

WHAT WE HAVE EVERYWHERE ARE BUSINESS CENTRES, NOT CHURCHES! – Pastor Olumide Emmanuel