The Senate on Wednesday approved a promissory note issuance in the sum of N10.069 billion for Kogi State Government for projects executed on behalf of the Federal Government.

The approval is sequel to the presentation and consideration of a report by the Senate Committee on Local and Foreign Debts.

Recall that President Buhari, in a letter written two weeks ago to the Senate, had requested for an approval for the refund to be made to the Kogi State Government.

Chairman of the Senate Committee on Local and Foreign Debts, Senator Clifford Ordia, said “the approved sum is in Capital Expenditure which has to do with refund to the State Government for monies spent in the execution of Federal Government Projects in the state.”

According to the lawmaker, key officials of the state government were invited to brief the committee in the course of its legislative work.

Ordia further disclosed that the committee also assessed all submissions made by the Federal Ministry of Finance, alongside documents from the Bureau of Public Procurement and Kogi State Government. The Committee in its report stated that it undertook an oversight visit to Kogi State to assess the projects and maintained that the said projects met the required standard by the Federal Ministry of Works and Housing.

The committee, in its findings, stated that “inspections were carried out by the Federal Ministry of Works and Housing,” adding that Kogi State has completed all the said projects and paid all contractors that executed them.

Senator Jibrin Barau (APC, Kano North), while commending the Governor of Kogi State, Yahaya Bello, said “Kogi has done very well. This should be approved so as to show other governments to take a cue.”

Coming under a point of order, the Senate Minority Leader, Senator Enyinnaya Abaribe, however argued that the Senate’s approval be delayed until after the Kogi governorship election scheduled to hold this weekend. He said: “States that have done the work of the Federal Government should be paid.

“I agree they should be paid, what I don’t want is misuse of this fund. I have the mandate of the minority to say this can wait until next week. Let’s us delay for only one week, after elections then they can be paid.”

The Senate President, Ahmad Lawan, in a counter argument, explained that Kogi State was entitled to be paid all monies spent on the execution of Federal Government projects in the state.

According to Lawan, Kogi State was denied an approval for refund while 24 state governments received an approval under the Eight Senate.

“Now as the ninth Senate, we have seen the necessity and are doing justice. We have done justice to others, and we have to do justice to Kogi State. When it is done is not the matter.”

The Senate eventually approved President Buhari’s request for a refund to Kogi State government after a voice vote called by the Senate President. 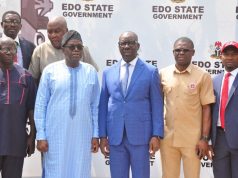