Women Arise, led by Dr. Joe Okei-Odumakin, is outraged by the latest confirmation of the brutish state of life in Nigeria in the killing of Mrs Acheju Abuh by political thugs after the conclusion of the electoral war in Kogi staged on Saturday.

Reports we received say Mrs Abu of Wada Aro Campaign was burnt alive in her home Monday afternoon by jubilant political supporters after the announcement of results said to be celebrating his victory.

They were said to have “poured petrol on the building and set it ablaze as other terrorized villagers
watched from hiding.

She reportedly attempted to escape through a window but was prevented by the metal burglary proof and gun shots with bullets raining in her direction. ”

“The blood thirsty thugs waited, shooting and watching with relish while Mrs Abuh cried from inside the inferno until her voice died out.

They reportedly left only when the entire house and Mrs Abuh had been burnt to ashes.”

It is our take that these senseless killings continue because perpetrators are not brought to book.
If those who killed during the elections had been apprehended, nobody would have had the gut to go and kill post election.

We therefore demand immediate arrest of Mrs Abuh killers and their prosecution.
We equally want all those who perpetrated killings during the elections to be fished out.
To leave these killings to go without consequences is to tell the world that are are an ANIMAL REPUBLIC.
Let women around the world rise for Mrs Abuh. 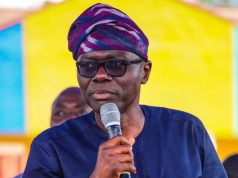 Awosika: We Will Not Stop Until Every Nigerian Girl-Child Has Found Her Voice And...