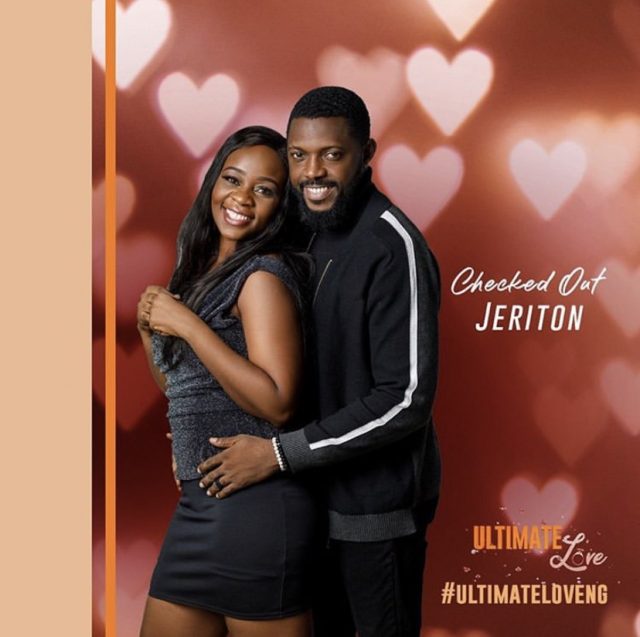 The duo of Jerry and Meriton (Jeriton) have been checked out of Ultimate Love, proudly Naija reality television show.

The couple became the second couple to bid the Love Pad goodbye during the live check-out show on Sunday after they received the least number of votes out of the seven nominated couples from the voting public last week. They, however, went home with N600,000 and other items in their portmanteau, after they played the Jeopardy game on stage.

Meanwhile, five couples were nominated for possible check-out during the live nomination show on Sunday. The couples as announced by the show’s hosts, Dakore Egbuson-Akande and Oluwaseun Olaniyan, are Bolar (Bolanle and Arnold), Roksie (Rosie and Kachi), PreshDavid (Presh Talker and David), Jelo (Jenny Koko and Louis) and Chivia (Chiddy Bankz and Sylvia).

Bolar led the pack this week with six nominations, Roksie had four nominations each; while PreshDavid, Jelo and Chivia got two nominations respectively.

However, Aunty has the power to save one of the couples from possible eviction and the couple will be saved after performing a real-world mission task as chosen by her. The couples selected for the task by the show’s Aunty– Adesuwa Onyenokwe are PreshDavid and Jelo.

The couples with the least number of votes will be evicted during the live check-out show next Sunday.

Voting will start on Tuesday at 8 pm and will close on Thursday at 10 pm. Voting can be done via the Africa Magic website, mobile platforms as well as DStv and GOtv Apps.

6 Educational Programmes To Keep The Children Learning on GOtv

Late Prof. Osotimehin was a pillar and mentor to Future Assured Programme – Mrs....

Agbaje: Under My Watch, Dirt Won’t Take Over Lagos

6 Educational Programmes To Keep The Children Learning on GOtv