ADVERTISEMENT
Justice L.N. Oweibo of Federal High Court, Ikoyi, Lagos, on Thursday, July 9, 2020 convicted and sentenced Captain Peter Okomi to three years imprisonment. Also convicted and sentenced was his company, Moyitok Nigeria Ltd and a vessel, M.V. Agbeke, for illegal dealing in petroleum products.
The convicts were prosecuted by the Lagos Zonal Office of the Economic and Financial Crimes Commission, EFCC, on three-count charges to which they pleaded guilty, following their arrest by officers of the Nigerian Navy and subsequent hand over to the EFCC for investigation and prosecution.
One of the charges read: “M.V. Agbeke, Moyitok Nigeria Limited, and Peter Okomi, on the 21st day of January, 2020, in Lagos, within the jurisdiction of this honourable court, without appropriate license, dealt in 100 metric tonnes of Automative Gas Oil (AGO) and thereby committed an offence contrary to Section 3 (6) of the Miscellaneous Offence Act, Cap. M17, Laws of the Federation of Nigeria and punishable under Section 1 (17) of the same Act.”
Upon their guilty pleas,, prosecution counsel, Mohammed Idris, reviewed the facts of the case and prayed the court to convict and sentence Okomi accordingly. He also urged the court to order the forfeiture of the vessel and the 100 metric tonnes of Automative Gas Oil (AGO, diesel) it conveyed to the Federal government of Nigeria, being proceeds of unlawful activity.
In a similar development, the Lagos Office of the Commission, today arraigned 10 suspected illegal oil dealers alongside a vessel, MV CX Fleet 1, before Justice Oweibo on three-count charges bordering on illegal dealing in petroleum products to the tune of 100 metric tonnes of Automative Gas Oil (AGO).
The defendants, Christopher Ewgeregor; Emeka Chidiebere; Erekedomene Lawrence; Okorie Collins Chukwuma; Julius Makingbene; Ededeni Bassey Okon; James Joshua; Kingsley Tamumobelema Ibiabuo, Iyobasogie Victor
and Ajenu Michael were arrested alongside the vessel by the Nigeria Navy and handed over to the EFCC for prosecution. 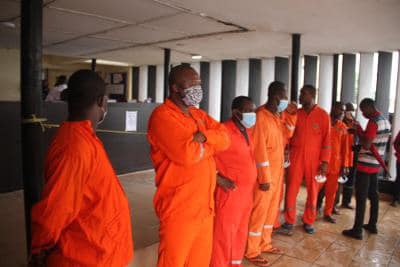 $25,000 Fraud: Shehu Sani Knelt And Begged Me To Change My EFCC Statement – Witness

A New MSME Academy Is Now Available For All Africa’s Micro, Small And Medium Enterprises In Nigeria

A New MSME Academy Is Now Available For All Africa’s Micro, Small And Medium Enterprises In Nigeria