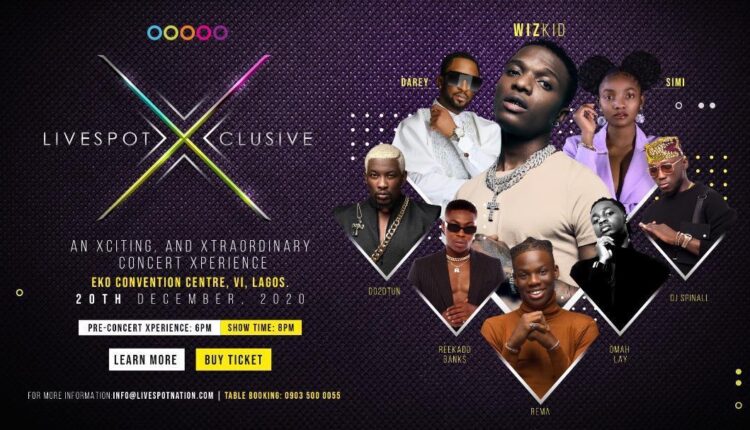 Multi-platinum Afro-soul star Darey will be returning to the stage with live performances of his hit songs including songs from his latest EP – Way Home. The revered Nigerian artist will be joining Wizkid, Yemi Alade, Simi and others live on stage at Livespot X-Clusive on December 19 and 20, 2020.

The follow-up to 2015 project Naked, Way Home is a triumphant return that features seven tracks including recent singles ‘Jah Guide Me’, which went to #1 in the Nigerian charts and entered the Top 20 of the UK iTunes Charts, ‘Jojo’, the infectious summer party jam featuring reggae-dancehall artist Patoranking and ‘Show Me Love’, featuring fellow Nigerian star Teni, which has so far garnered over 1.3 million streams across DSPs.

“I’m excited that I get to do this again and on such a big platform – one I’m building with the fantastic team over at Livespot360. With the love the Way Home EP has gotten over the past few weeks and months, I can’t wait to share the experience live with my fans,” Darey explained. “For the first time in a few years, I get to combine my roles as Chief Creative Director of Livespot360 and artist on one stage and I’m beyond elated. Livespot X-Clusive is going to be an exceptional show and I can’t wait for everyone to see it.”

The son of legendary African jazz musician and entertainer Art Alade, Darey Art Alade aka Darey is a multiple award-winning artist and seasoned live performer who has shared stages with the likes of Beyoncé, Wizkid, Jay Z, Ciara, Cardi B, Burna Boy, Sean Paul, Usher, R Kelly, Akon, Lionel Richie and many more. His rich, diverse back catalogue has racked up millions of record sales and streams, helping him amass a loyal following across Africa and beyond.

Also a creative entrepreneur, Darey is the co-founder of Livespot360, a creative collective responsible for last year’s Livespot X Festival which saw Darey bring Cardi B to Africa for the first time as she headlined across its Lagos and Accra events.

In a company statement, Livespot360 revealed that the conception of Livespot X-Clusive was borne out of a need to end the year most emphatically.

According to CEO, Livespot360, Deola Art Alade, LiveSpot X-Clusive is the entertainment industry’s answer to a most-difficult year, marred by developments that have had striking effects on Nigerians:

“After more than ten months of hardship for so many people, we decided to take up the mantle to ensure Nigerians do not end the year in the same, monotonous fashion. In December, we plan to shake the core of music lovers through this epic concert, and we have acquired the services of the most-loved artists in the country to ensure that. As expected, this event will be planned with guidelines in place to ensure everyone’s safety, but we guarantee that it will be the most bombastic celebration this year. It will be a celebration we all deserve.”

The live concert will be limited to keep in line with COVID-19 restrictions. Fans and interested parties unable to secure tickets to the physical concert will still be able to watch the show live as Livespot360 also announced it will stream the event live on Livespot Nation.

Livespot X-Clusive is a brainchild of Livespot360, a creative collective of the digital era, unified by a passion for developing disruptive ideas. Combining digital marketing, experiential marketing, advertising, education and entertainment for the Nigerian audience, Livespot constantly pushes the quality and performance bar higher.

Episode 2 Of Nancy Isime’s ‘Jollof With Me’ Airs Tomorrow, Here Are 3 Things To Look Out For