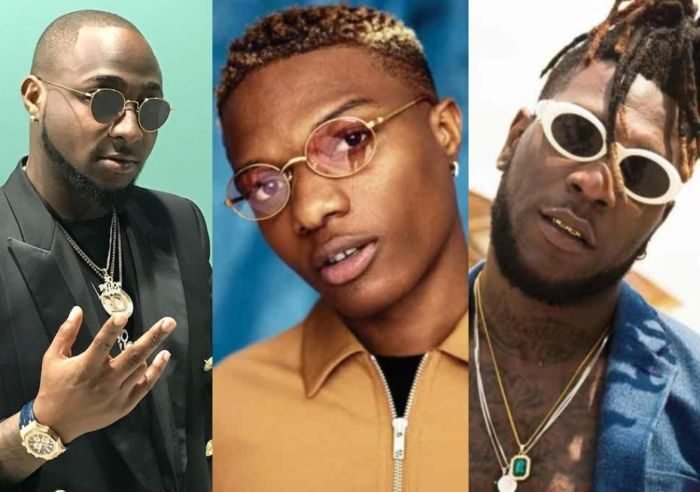 Davido vs Wizkid vs Burna: Who’s The Real African Giant On Twitter?

Every three days on Obasanjo’s Twitter, there’s always that one person from either the 30 Billion Gang or Wizkid FC or Burna Boy “management” who comes online to resurrect the never ending and tiring argument of who the better artist is. And maybe we are hypocrites or simply throwing stones at glass houses but today, we are going to be that one person. Well that one person with a twist.

With no intentions of disrespecting the three kings who have no doubt put Nigerian and African music on the global map, we decided to settle this using the viral socialcred to see which of these superstars truly rule the streets of Twitter NG.

In one corner, with over 7 Million followers we have Davido; leader of the 30 Billion Gang, occasional giver of 1 Million Naira, creator of the popular twitter meme “Edonfincho” and genius behind numerous chart topping hits.

According to the app, the ‘Sweet In The Middle’ crooner ranks as an A-Lister with an engagement rate of 0.09% and a 3:4 original post to retweet ratio. His tweets receive an average 40% positive response, 36% neutral response, and 24% negative response.

In another corner, with over 6 Million followers, we have Machala himself; President of Wizkid FC, per time Twitter comedian, originator of the ‘Everywhere stew’ phase and mastermind behind countless Global hits.

Just like Davido, Starboy ranks as an A-Lister with an equal engagement rate of 0.09% and a 1:2 original post to retweet ratio. The Nigerian Singer and Songwriter receives an average 26% positive, 56% neutral, and 18% negative response to his tweets and other related contents.

And in the last corner, with over 3 Million followers, we have Twitter’s favorite “Nemesis”, our “Odogwu” with management, the African Giant and brains behind our second National Anthem “Ye”, yes you guess it… we are talking about Burna Boy.

Like the previously mentioned hitmakers, Burna Boy also ranked as an A-Lister with an engagement rate of 0.09% and an original post to retweet ratio of 2:3. Unlike the expected, the “Gum Body” singer receives an average 32% positive, 56% neutral, and 12% negative response to his often controversial tweets.

Whether you’re a Wizkid, Burna or Davido fan, one thing you’d agree with us is the fact that these 3 musicians have consistently served as a source of entertainment both on and off the mic. And as we come to the end of this battle, it should be said that Davido, Burna and Wizkid are all superstars in their own right who have uplifted the NIgerian music industry. And although the three hitmakers fare side by side when it comes to making national and global hits, Davido clearly rules the mean streets of Twitter Ng and we can’t help but stan a music making, entertaining twitter king.