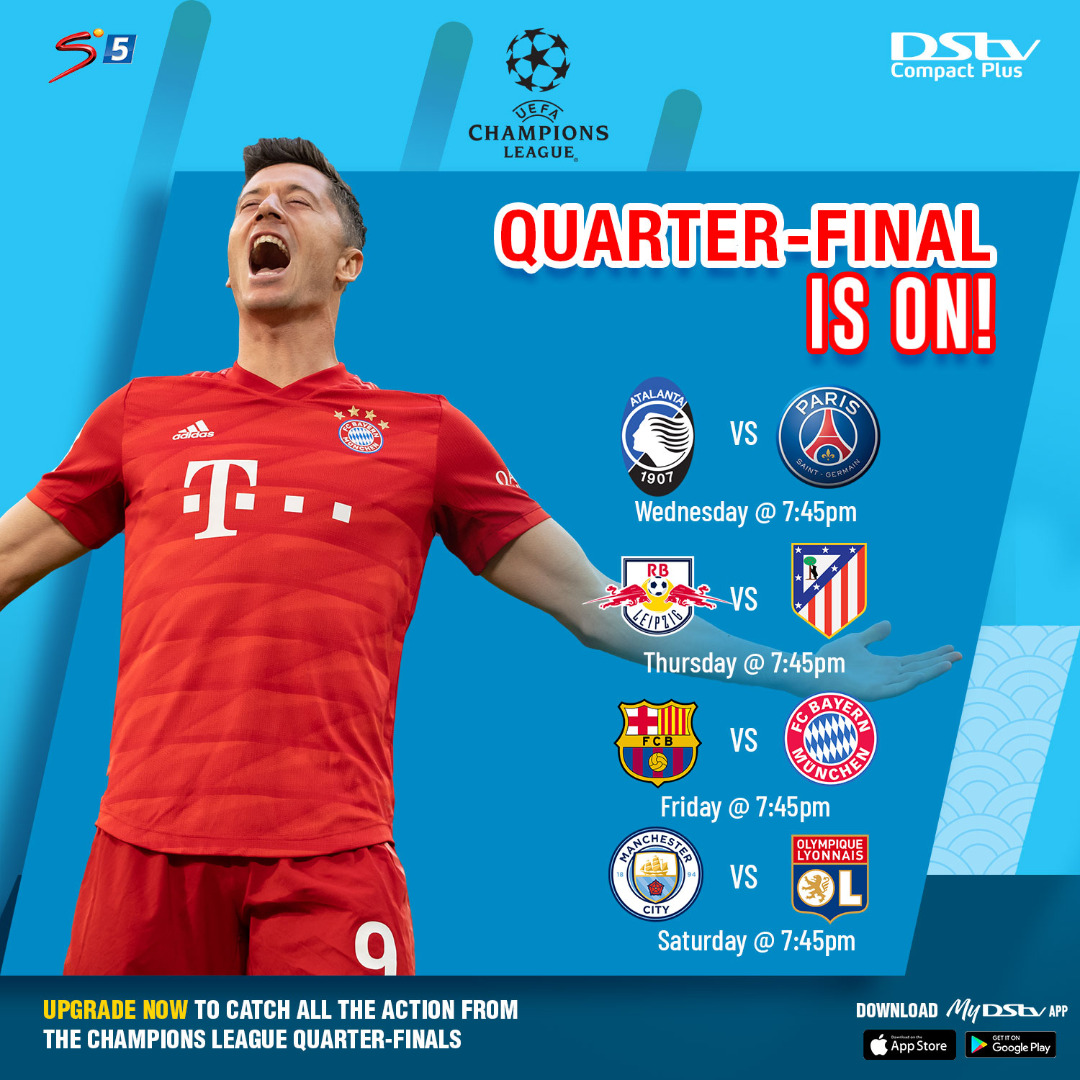 Enjoy The Best Of UEFA Champions League Quarterfinals On DStv

SuperSport viewers on DStv can enjoy the continued return of the UEFA Champions League, as the quarterfinal ties will be played this week, starting Wednesday 12 – Saturday 15 August 2020.

SuperSport is your #HomeOfFootball and the only place to get your fill of world-class soccer action from the UEFA Champions League.

The first quarterfinal takes place at Estadio da Luz in Lisbon, Portugal on Wednesday 12 August, with Serie A side Atalanta tackling French Ligue 1 champions Paris Saint-Germain. While La Dea will be in rhythm from completing the 2019-20 Italian top flight season earlier this month, PSG have had only two competitive fixtures (the French Cup and French League Cup finals) in recent weeks and could come into the match ‘undercooked’.

PSG manager Thomas Tuchel, meanwhile, has praised La Dea’s football and acknowledged that the match will be a tough one: “Atalanta are a very spectacular team, very strong in attack. They play every time in order to score a lot of goals, and they go one-on-one in all parts of the field. It’s a really spectacular way of playing and I really enjoy watching them. Our challenge is to be ready for it and to prepare in a serious way. It will be a very tight game, a very hard game, but we are there to win it.”

Thursday 13 August brings the second quarterfinal, with RB Leipzig and Atletico Madrid facing off at Estadio Jose Alvalade and looking to set up a meeting in the semi-final with the winner of Wednesday’s match.

These two teams notably eliminated last season’s finalists – Leipzig crushed Tottenham Hotspur 4-0 on aggregate, while Atletico ended Liverpool’s reign as European champions with a 4-2 triumph overall – and both come into the clash full of confidence.

The past weekend’s action, which saw the return of the world’s premier club competition, set up the second pair of quarterfinals. On the evening of Friday 14 August, Barcelona will take on Bayern Munich at Estadio da Luz in Lisbon.  Barcelona were made to work hard for their 3-1 (4-2 on aggregate) triumph over Napoli this past weekend, with Lionel Messi once again proving the talisman to see the Spanish side advance.

While on Saturday 15 August, Manchester City and Olympique Lyon will meet at Estadio Jose Alvalade in Lisbon. City were able to complete an impressive triumph over La Liga champions Real Madrid, winning 2-1 at the Etihad Stadium (thanks to goals from Raheem Sterling and Gabriel Jesus) to take their round of 16 tie 4-2 on aggregate. The Citizens look more than capable of winning the Champions League for the first time in their history.

No rival can compete with SuperSport’s coverage. Our viewers on DStv have found their #HomeOfSport.

Don’t miss the conclusion of the 2019-20 football season on DStv. Visit www.dstvafrica.com to subscribe or upgrade and join in on the excitement. And while you’re on the move, you can stream matches on DStv Now.