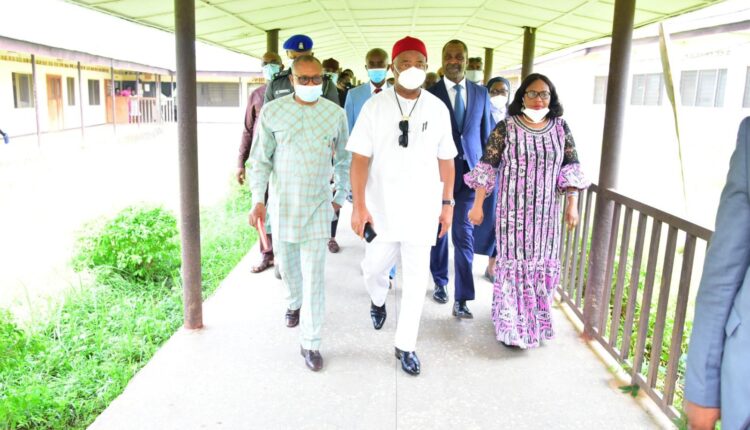 Governor of Imo State, Senator Hope Uzodimma has promised to restore the accreditation of the Imo State University Teaching Hospital (IMSUTH Orlu) which was lost several years back.

He has also promised that his government will do her best to provide the needed facilities that will enable the Teaching Hospital be of service to the graduating students and carter for the health needs of the people of Imo state.

Governor Uzodimma gave the assurance when he addressed newsmen after visiting and inspecting facilities at the IMSUTH, Imo Foundation and Ochiedike Medical and Dialysis Centre in Owerri on Tuesday.

Governor Uzodimma noted that government is critically looking at the challenges in the Health and Education sectors of the state and that it has become necessary that the Imo State University Medical School which had lost its accreditation must be helped to recover same.

He said the visit to the institution was partly to identify the needs and requirements for accreditation with a view to addressing them, particularly to ensure that the Medical School gets back its accreditation by the National Universities Commission (NUC).

The Governor regretted that loss of accreditation has affected graduation of the students for years.

On why activities at the Medical School are low, the Governor said that in the process of automating the salary payroll of the workers in the University it was discovered that most of the Medical Doctors who are rendering clinical (consultancy) services in IMSUTH are also lecturers of Imo State University.

He said the implication was that they were collecting double salaries as lecturers and Medical Doctors, noting that it is not only unhealthy for Imo State government of today but that if allowed to stand, in the future when they retire from service they will be receiving pensions as both Medical doctors and University lecturers.

“It is in the process of harmonizing the above that there arose a disagreement which should be considered as a temporary setback because at the end of the day all will come to a round table to agree the right things,” the governor explained.

The Governor however appealed to the Medical Doctors rendering skeletal services at IMSUTH to continue with what they are doing, assuring that soon Government will embark on rapid upgrade of the facilities to enable the students graduate and at the same time, procure adequate medical services for the people of Imo State.

He said soon, government will engage the Medical Doctors, Principal Officers of the College and other stakeholders in an interaction that will benefit both government, the workers and to a large extent, be to the greater benefit of Imo people.

On the entourage of the Governorwere the Secretary to the State Government, Chief Cosmas Iwu, Chief of Staff, Barr. Nnamdi Anyaehie, Hon. Commissioner for Special Duties, Barr. Francis Dibiagwu and other members of the State Executive Council.

Kaunda Was One Of The Greatest African And World Leaders Of All Time, Says Buhari

Nigeria’s Unity And All The Iberiberism – By Femi Adesina