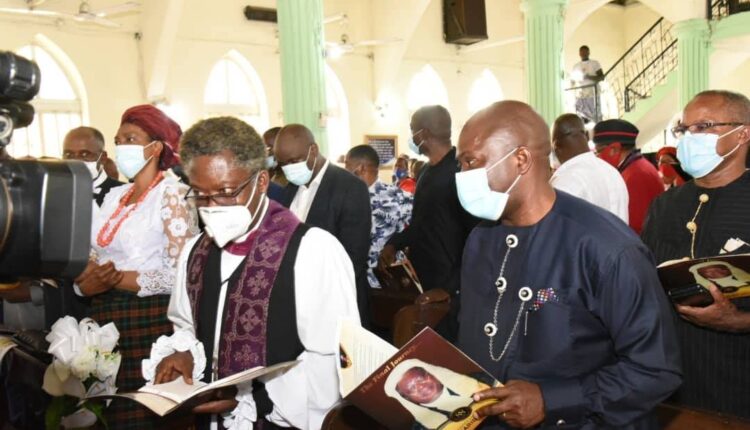 By AJAYI GIDEON On Sep 27, 2020
76
Share
Rivers State Governor, Nyesom Ezenwo Wike has described late Justice Godwin Karibi-Whyte as an epitome of unshakable integrity, civility and dignity.
Governor Wike stated this Saturday during the funeral service of the late legal icon at Saint Augustine’s Anglican Church, Abonnema in Akuku Toro Local Government Area.
The Governor who was represented at the event by his Chief of Staff, Engr. Chukwuemeka Woke said Justice Karibi-Whyte was a prominent son of Rivers State and a great jurist who dedicated over six decades of his life to the service of the nation.
“Justice Karibi-Whyte was a man of many great parts. As an academic, he taught, published and mentored many young ones to success. As a public servant, he was dedicated, professional and result-oriented.
“As a jurist, he was devoted to the cause of justice and always defended the dignity of the legal system.
“He wrote precisely and simply as he spoke with juristic elegance and his judgments were models of deep forensic thought anchored on sound legal logic”, he said.
Governor Wike noted that the nation and the state lost a superb jurist and hero who would forever remain an inspiration to many.
He said the State would take solace in the fact that he would be remembered for his brilliance and scholarship.
“His consummate dedication to the rule of law and extra-ordinary passion for undiluted justice for all will remain evergreen.
“As we bid farewell to a devoted husband, a loving father, a brilliant scholar , a fine public servant and an exceptional jurist, let us all renew our faith in God and commit ourselves to building a more peaceful, just and progressive society,” he added.
Meanwhile, the Chief of Staff reacting to the comment made by a former Governor of the State, Rotimi Amaechi on the development of Kalabari Land and the security situation in the State said it was obvious that he has lost touch with developments in the State.
He said that since the launching of Operation Sting by Governor Wike’s administration, the security situation has improved greatly.
” It is unfortunate for Amaechi to come to Kalabari Land and accuse former President Goodluck Jonathan of not developing the area six years after he had left office.
“I wonder why the former Governor will choose to make such embarrassing remarks at the funeral of Late Justice Karibi-Whyte, a man he claimed to be his mentor,” he stated.
He said that for five years as a minister, Amaechi cannot boost of attracting any project from the Federal Government to his state.

#EndSARS: Inside PMB’s Parley With Former Heads Of State, By Femi Adesina