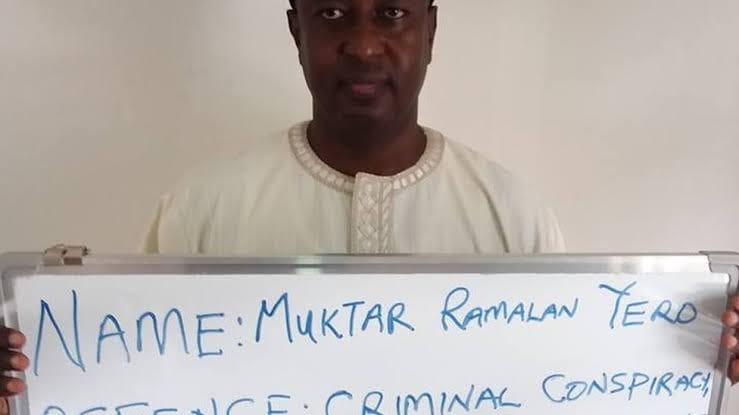 By AJAYI GIDEON On Feb 24, 2021
52
Share
The trial of a former governor of Kaduna State, Muktar Ramalan Yero, before Justice Z. B. Abubakar of the Federal High Court sitting in Kaduna continued on Tuesday, February 23, 2021 with the tendering of evidence by the first prosecution witness (PW1), Jonah Abimaje.
Yero is being prosecuted by the Kaduna Zonal Office of the Economic and Financial Crimes Commission, EFCC, over his alleged involvement in the ‘sharing’ of N700million provided by former Minister of Petroleum Resources, Diezani Alison-Madueke to influence the outcome of the 2015 presidential election.
Abimaje, who was Head of Operations at Ahmadu Bello Branch Kaduna, and acting regional Head of Operations, Ali Akilu Branch of a new generation bank in 2015, had during his testimony at the last sitting (January 21, 2021) narrated how monies received by the bank from the Central Bank of Nigeria was collected by the defendants.
The witness testified to the effect that, the said sum was paid to the 2nd and 4th defendants in cash, to which they signed a ‘collection form’ individually as evidence of collection.
At the resumed sitting today, Abimaje, while being led in evidence by counsel to the EFCC, Nasiru Salele, tendered two receipts of cash collected by the defendants.
The admissibility of the documents was strongly objected to by the defence who argued that the documents were not properly certified and that such document ought to be tendered through an officer of the Commission and not through a private witness from the bank.
In response, Salele argued that the documents were properly certified by the bank adding that, the originals of the documents in question were still in the custody of the bank. He urged the court to admit the documents in evidence.
After arguments and counter arguments by counsel, Justice Abubakar adjourned till March 25, 2021 for ruling and continuation of hearing.

Presidency Responds To Alleged Fire Incident At The Villa