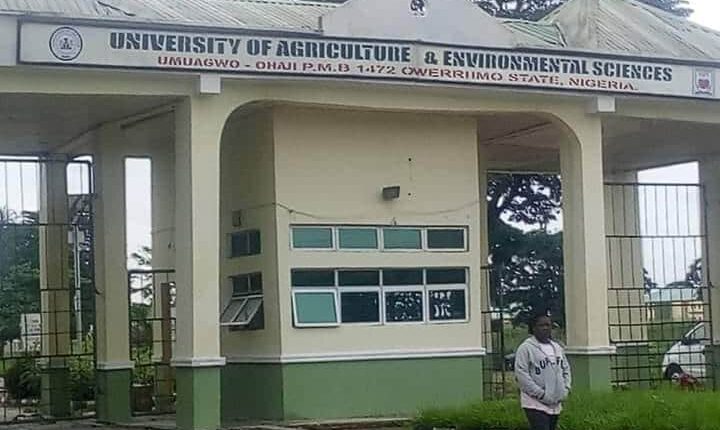 The Nigerian University Commission (NUC) has approved the take off of the Imo State University for Agriculture and Environmental Sciences in October this year.

The approval underscores the efforts which the Imo State government ably led by Governor Hope Uzodimma has made towards the establishment of a second university for the state.

Recently, the NUC panel was in Imo State to carry out the necessary verification exercises on the state facilities, human and physical infrastructures.

The cheery news was communicated to reporters at the end of the weekly Executive Council Meeting at the Exco Chambers, Government House, Owerri presided over by the Governor Uzodimma.

Commissioner for Information and Strategy, Mr. Declan Emelumba flanked by the Commissioner for Education, Prof. Bernard Ikegwuoha, Commissioner for Health Dr. Damaris Osunkwo and the Chief Press Secretary/ Media Adviser to the Governor Mr. Oguwike Nwachuku, informed that Executive Council is happy that something new is happening in the Education sector of the State.

Emelumba said that the Imo State University of Science and Environmental Sciences, Umuagwo will take off by October when other universities would be resuming for a new academic session.

In the same vein, he the Council has approved the immediate relocation of Faculty of Engineering Imo State University Owerri to its permanent site at Okigwe, stressing that Government has put all processes and facilities on ground to ensure the immediate take–off of the faculty.

The Council also approved the construction of a modern Abattoir in Okigwe aimed at ensuring the hygienic processing of poultry  and other forms of meat as well as acquisition  of the Federal Government Silo and steps taken towards completing the project and making it functional.

The Commissioner also informed that in a bid to reduce the impact of community spread of Covid-19 in the rural areas of Imo State, the United State Agency for International Development (USAID) is in the 27 Local Government Areas of the State testing people for Covid-19.

Emelumba said that the Council also approved the enactment of the law on Agricultural Agencies to help in facilitating Agricultural development in Imo State. Also, he said another Law is in the offing that will make Imo Housing Corporation effective and efficient in the provision of affordable houses for formal and informal sector, including civil servants. The laws, the government said, will soon be submitted to Imo State House of Assembly.

Council equally applauded Governor Uzodimma for inaugurating a strong Governing Board for the Imo State University that will move the institution to the next level considering the men and women of integrity that make up the Council.

Council, Emelumba noted, approved that the land provided for the residential purposed for Judges at Onitsha Road which has been encumbered by illegal occupants should be retrieved immediately and where possible, revoke the C-of-O given to those who have traded it out in exchange, as Government is determined to provide affordable houses for Judges.

The Commissioner for Information finally explained that the Council also approved the change of the State Ministry of Technology Development to Ministry of Science and Technology in line with her sister Ministry at the National level and in states.

AfCFTA: We Are Well-Positioned To Make Payments Smooth For Our Customers – Ecobank…