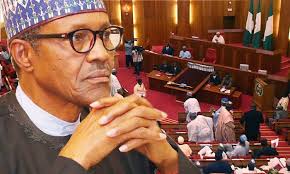 By AJAYI GIDEON On Jul 14, 2020
14
Share
The Senate has urged the President Muhammadu Buhari-led government to direct the immediate deployment of a Semi-Permanent Platoon of soldiers to decisively uproot bandits and insurgents seeking refuge in Jigawa communities after fleeing the wrath of security agencies in some northern states.
The call was made by the upper chamber on Tuesday following consideration of a motion on “the need for the establishment of a Military Unit in Jigawa State.”
Sponsor of the motion, Senator Hassan Hadejia (APC – Jigawa North East) bemoaned the invasion of communities in Jigawa state by insurgents and bandits fleeing mounting pressure of security agencies across other northern states.
“These migrant alien settlers are masquerading and mixing with herders trooping to the area because of the fertile flood plain and thick forest cover,” he said.
According to Hadejia, the zone which is bordered by Yobe and Bauchi States and Niger Republic has faced challenges of insurgents sneaking in to take temporary refuge from army operations.
He added that, “proactive measures by the security operatives in conjunction with a reporting mechanism using traditional institutions has ensured they are neutralized before they localize and take root.”
The lawmaker expressed worry that “most of these herders and other armed groups that mingle with them appear to be non-nationals and their activities in the last 12 months has assumed a dangerous dimension resulting in attacks and raiding of villages.”
“They have also adopted unwarranted destruction of farm produce to discourage farmers from planting in what appears to be an extension of the strategy in the far northwest to disrupt agricultural production and precipitate calamitous food insecurity in the country to aid in their strategy of creating instability through hunger and local economic devastation.
“The three local Governments affected form the flood plain of the Hadejia River Basin and are the most productive in the zone providing fertile land and abundant water to thousands of families who can achieve 3 harvest annually;
“The perpetrators have no fear or regard for the police and the local inhabitants are also losing confidence in the authorities as no one has yet been apprehended and successfully prosecuted”, the lawmaker said.
Hadejia lamented that, “several lives have been lost as the marauders mercilessly hack down innocent villagers in a gruesome manner with the latest incident claiming almost 10 lives last week.”
“There is need for take preventive measures so an to avert the Zamfara and Katsina experience”, he added.
The Senate accordingly, called on the Federal Ministry of Agriculture and the Federal Ministry of Humanitarian Affairs to immediately arrange for distribution of relief materials and agricultural support to the affected communities to enable crop cultivation during the rainy season.

Uzodimma Vows To Be Transparent, Accountable In All Official Dealings