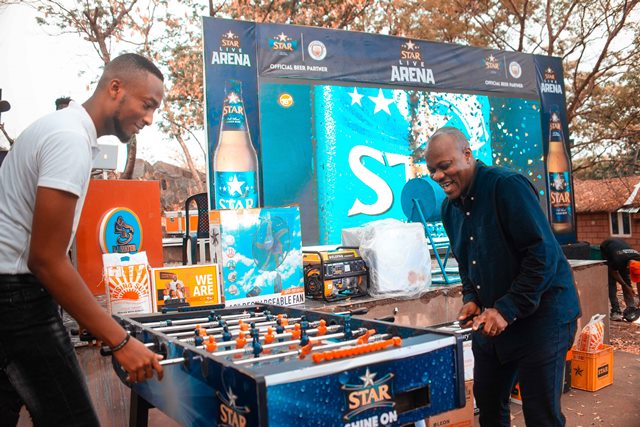 Nigerian football fans were treated to a thrilling experience this Sunday as they enjoyed an exclusive viewing of the Carabao Cup Final between the current champions, Manchester City and Aston Villa, courtesy of Star Lager Beer on March 1, 2020.

The match was the third time both teams have met this season, with Manchester City winning all three games. The final was hotly-contested as both teams slugged it out for the trophy, but Manchester City’s quality in squad depth and ability proved to be too much for the men in Claret and Blue, who put on a spirited display.

Hosting fans at the recently launched Star Live Arena, Nigeria’s foremost beer brand, Star Lager, gave fans the perfect atmosphere to enjoy the brilliance of a Manchester City side who predictably dominated the Villa side.

The Star Live Arena is a new platform in partnership with Man. City in which Star Lager Beer offers fans an immersive experience of the Premier League as well as other competitions involving Manchester City in bars around them. The initiative — which kicked off with the Carabao Cup Final at select bars in Abuja and Jos — is one of Star Lager’s many sports initiatives to connect with its consumers through passion points, like football.

In the past, Star Lager has supported the Super Eagles of Nigeria at various tournaments and signed major deals with top European sides including Real Madrid, Juventus and Chelsea during the 2016/2017 season. The brand also became the first official beer partner of the Nigeria Professional Football League (NPFL) in the same year.

The first game of the new campaign proved to be a huge delight for football fans as it bore all the things that one could expect from a cup final, involving Manchester City. While some of the fans came for the goals and love for the Carabao Cup, everyone got a good taste of the entertainment, rewards and of course, ice-cold Star Lager Beer. There were more side games at halftime and the final whistle, with fans also sharing their reactions from the game.

Portfolio Manager, National Premium Brands, Sarah Agha, who made remarks at the viewing said she was happy that everyone had a good time, and looks forward to more weeks of premium football viewing experiences.

“We know how much Nigerians love football and how support for Manchester City has grown over the years, and we are glad we can give fans the perfect atmosphere to watch the club play,” she added.

A shot from close range saw club legend, Sergio Aguero put Manchester City in front in the first half, with Rodri doubling their lead in the 30th minute in what seemed like another blowout from the champions, but Aston Villa were determined not to follow the script as Mbawana Samatta pulled one back in the 41st minute, setting up a thrilling game. But Manchester City’s quality proved to be enough to enable them to see out their one-goal lead to the end, becoming Carabao Cup winners for a third consecutive time.