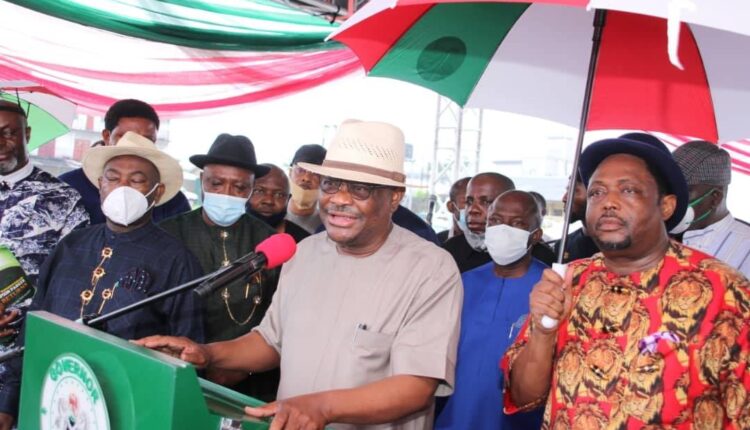 By AJAYI GIDEON On Oct 5, 2020
144
Share
Rivers State Governor, Nyesom Ezenwo Wike says contract for the award of the second phase of Okochiri Internal Roads in Okrika Local Government Area has been awarded.
Also awarded is the reclamation of 25 hectares of land at the ATC area in Okrika Island as well as the construction of Wakama-Ogu Road in Ogu/Bolo Local Government Area.
Governor Wike announced this today while addressing the people of Krikese Kingdom when the former Commissioner of Health in the Rotimi Chibuike Amaechi administration, Dr. Sampson Parker led over 2,000 of his supporters from the All Progressives Congress (APC) to the Peoples Democratic Party (PDP) at Okochiri in Okrika Local Government Area.
“I was here last time and I promised the people of Krikesegbese that I am going to award the second phase of the Okochiri Internal Roads.
“I also told the people of Krikesegbese that I am going to sandfill 25 hectares of land at the ATC area of Okrika Island.
“Again, I told you people that I am going to award the Wakama-Ogu Road in Ogu-Bolo Local Government Area.
“As today, those contracts have been awarded since last week Friday and they will be executed by indigenes of your area,” he stated
Governor Wike lauded Dr. Sampson Parker for taking the bold step to come back to his former Party.
He recalled the role played by Dr. Parker in the emergence of former Governor Rotimi Chibike Amaechi in 2007 and that his coming back to the PDP would add value to the Party.
Governor Wike urged political leaders in the area not to discriminate him, but ensure that he be carried along in the scheme of things.
“Dr. Parker was one of those God used alongside some of us to bring Amaechi in as Governor of Rivers State in 2007.
“We thought that from that time, everybody will be united, but we didn’t know that some persons had different plans, but God’s plan is always the best.
“When I was leaving in 2012, I told Dr. Parker that things are not moving well and I am going. But he insisted that I should remain as there was need for us to continue to be together.
“But I am happy today that my friend and brother has realized what I told him then and has returned to the PDP.
“Dr. Parker came at the right time and nobody should discriminate him because with the level of politics he had played, he will add value to the Party”, the Governor said.
In his speech, the former Commissioner for Health, Dr. Sampson Parker described the occasion as home coming to the PDP family.
He stated that his conscience and soul are at peace with his decision and pledged his loyalty to the Party.
Dr. Parker lauded Governor Wike’s developmental strides in Krikese Kingdom and thanked him for accepting his return to the PDP.
Rivers State Chairman of PDP, Ambassador Desmond Akawor who received Dr. Parker into the Party said the decision of the former Health Commissioner was based on the massive development projects the Governor has sited across the State.
He described former Governor Chibuike Amaechi as politically dead, having lost key political allies in succession to the PDP.
In his goodwill message, the Leader of PDP in Okrika Local Government Area, Dr. Abiye Sekibo thanked Governor Wike for always rising to the occasion in defense of the people of Krikesegbese.
He also lauded the Governor for the various developmental projects executed in the area and assured him of their support.
Chairman of Okrika Local Government Area, Chief Philemon Iwoloma Kingoli noted the love the Governor has for the Okrikans and promised to always stand by him.

Have The Dreams Of Our Heroes Past Been In Vain? – By Dakuku Peterside