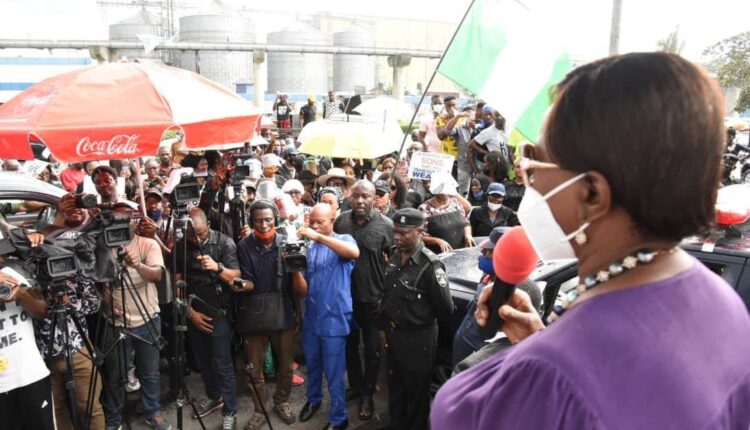 By AJAYI GIDEON On Oct 19, 2020
63
Share
Rivers State Governor, Nyesom Ezenwo Wike has restated his call for the total reform of the Nigeria Police Force.
Governor Wike was speaking while addressing thousands of Rivers women under the auspices of “Concerned Mothers in Rivers State” who came on #EndSARS protest march to Government House, Port Harcourt.
The Governor who spoke through his Deputy, Dr. Ipalibo Harry Banigo said that the State Government felt their pains.
He recalled that the State was the first to raise an alarm in 2015 over the negative activities of SARS, but the Federal Government refused to act.
The Governor emphasised that it is only through total reform of the Police that the injustice meted to innocent citizens of the country would stop.
“As a Government, we feel your pains and this injustice most surely stop.
“To tell you the level of impunity, some SARS officers that were even caught on camera killing people were even promoted.
“I want to thank you for the peaceful way you have conducted yourselves and assure you that we shall work together,” he stated.
Speaking on behalf of the “Concerned Mothers in Rivers State”, Mrs Ivy Davies Etokakpan said the protest was to lend their voices to end Police brutality in the country.
She noted that within the last two weeks mothers in the State have heard gruesome stories of Police brutality on young people.
Mrs Etokakpan called on the Police in the State to carry out their duties in line with international best practices.
Also speaking, Nollywood Actress,Hilda Dokubo said the protest which is devoid of ethnic, religious and political affiliation is against the system of governance in the country.
She advocated an end to institutionalized injustice, inequality and lack of development.
Mrs Dokubo called for a new Constitution that would guarantee freedom, access to good roads, quality education and healthcare.